Brent Cebul (PhD, University of Virginia) works on 20th century United States history with interests in political history and statebuilding, urban history, political economy and capitalism, race and inequality, federalism, and business-state interaction. In addition to co-editing a volume of essays that recenters the growth of big government in 20th century political history, a number of recent publications explore the politics of market creation and poverty. Cebul also has an ongoing interest in the digital humanities and was a lead project investigator for Renewing Inequality, which, as part of American Panorama, was awarded the 2019 Roy Rosenzweig Prize for Innovation in Digital History from the American Historical Association.

His current book project is Illusions of Progress: Business, Poverty, and Liberalism in the American Century (under contract with Penn Press). Illusions of Progress illuminates the evolution of 20th century federal economic development and antipoverty programs to better understand the long history of public private partnerships and the persistence of racialized poverty in the United States. During the New Deal and in the years following World War II, liberals fused three distinct and often cross-cutting policy goals within their domestic growth agenda: their desire to decentralize planning and federal subsidies to stimulate new markets; an effort to shore up the tax bases and fiscal capacities of state and local governments; and a progressive commitment to raising the living standards of impoverished regions and people. This liberal worldview, which the book dubs “supply side liberalism,” positioned economic growth as the wellspring of a virtuous circle of expanding tax revenues and progressive social policies. Yet, by binding their visions of social progress to the interests of capital – and in particular by endowing local businesspeople with broad discretion over the uses of unprecedented federal capacities – liberals often entrenched the very inequalities of power and economic opportunity they imagined their programs solving. Illusions of Progress explains how, even as liberal development programs fueled economic expansion for some, the competitive and often zero-sum nature of federal programs sped calls to bring businesspeople, businesslike methods, and market forces into the workings of the state. In the era of Bill Clinton’s New Democrats, the embrace of the market obscured the degree to which market forces and actors had always been central to liberals’ political vision. In broadest terms, then, the project illuminates deeper continuities in liberal and neoliberal political economic thought even as it emphasizes the narrowing of the liberal social imagination over the 20th century.

HIST 231 History Behind the Headlines: Contemporary Political and Policy Debates in Historical Perspective

Shaped by the State: Toward a New Political History of the Twentieth Century, co-edited with Lily Geismer and Mason B. Williams. Chicago: University of Chicago Press, 2019.

“The Antigovernment Impulse: The Modern Presidency, the Market, and the Splintering Common Good.” In The President and American Capitalism Since 1945, edited by Roger Biles and Mark Rose, 99-122. Gainesville, FL: University Press of Florida, 2017.

“‘They were the moving spirits’: Business and Supply-Side Liberalism in the Postwar South.” In    Capital Gains: Business and Politics in the Twentieth Century, edited by Richard R. John and Kimberly Phillips-Fein,139-156. Philadelphia: University of Pennsylvania Press, 2016. 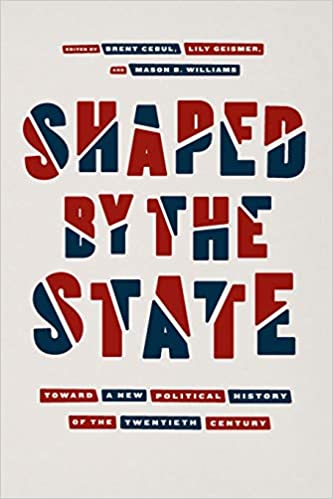