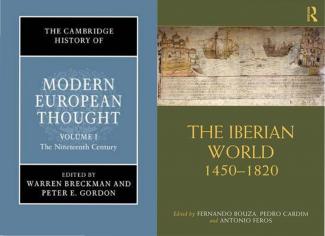 Warren Breckman, and co-editor Peter E. Gordon (Harvard University), recently published the two-volume Cambridge History of Modern European Thought: Volume 1: The Nineteenth Century; Volume 2: The Twentieth Century.  The Cambridge History of Modern European Thought is an authoritative and comprehensive exploration of the themes, thinkers and movements that shaped our intellectual world in the late-eighteenth and nineteenth century. Representing both individual figures and the contexts within which they developed their ideas, each essay is written in a clear accessible style by leading scholars in the field and offers both originality and interpretive insight. Renouncing a single 'master narrative' of European thought across the period, Peter E. Gordon and Warren Breckman establish a formidable new multi-faceted vision of European intellectual history for the global modern age.

The first volume surveys late eighteenth- and nineteenth-century European intellectual history, focusing on the profound impact of the Enlightenment on European intellectual life. Spanning twenty chapters, it covers figures such as Kant, Hegel, Wollstonecraft, and Darwin, major political and intellectual movements such as Romanticism, Socialism, Liberalism and Feminism, and schools of thought such as Historicism, Philology, and Decadence. The second volume surveys twentieth-century European intellectual history, conceived as a crisis in modernity. Comprised of twenty-one chapters, it focuses on figures such as Freud, Heidegger, Adorno and Arendt, surveys major schools of thought including Phenomenology, Existentialism, and Conservatism, and discusses critical movements such as Postcolonialism, Structuralism, and Post-structuralism.

Antonio Feros, and co-editors Fernando Bouza (Complutense University, Madrid), and Pedro Cardim (New University Lisbon), just published The Iberian World, 1450-1820 (Routledge). The Iberian World: 1450–1820 brings together, for the first time in English, the latest research in Iberian studies, providing in-depth analysis of fifteenth- to early nineteenth-century Portugal and Spain, their European possessions, and the African, Asian, and American peoples that were under their rule.

Featuring innovative work from leading historians of the Iberian world (one of them another UPenn historian, Roquinaldo Ferreira), the book adopts a strong transnational and comparative approach, and offers the reader an interdisciplinary lens through which to view the interactions, entanglements, and conflicts between the many peoples that were part of it. The volume also analyses the relationships and mutual influences between the wide range of actors, polities, and centres of power within the Iberian monarchies, and draws on recent advances in the field to examine key aspects such as Iberian expansion, imperial ideologies, and the constitution of colonial societies.

Divided into four parts and combining a chronological approach with a set of in-depth thematic studies, The Iberian World brings together previously disparate scholarly traditions surrounding the history of European empires and raises awareness of the global dimensions of Iberian history. It is essential reading for students and academics of early modern Spain and Portugal.