Inscription and Erasure: Literature and Written Culture from the Eleventh to the Eighteenth Century 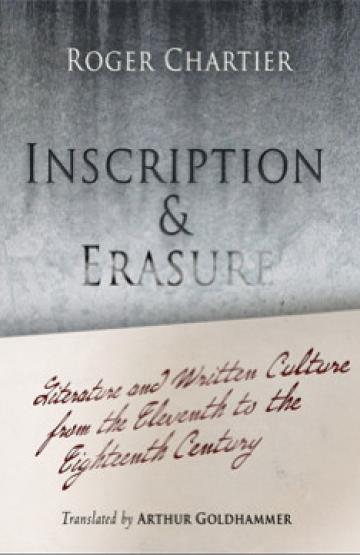 The fear of oblivion obsessed medieval and early modern Europe. Stone, wood, cloth, parchment, and paper all provided media onto which writing was inscribed as a way to ward off loss. And the task was not easy in a world in which writing could be destroyed, manuscripts lost, or books menaced with destruction. Paradoxically, the successful spread of printing posed another danger, namely, that an uncontrollable proliferation of textual materials, of matter without order or limit, might allow useless texts to multiply and smother thought. Not everything written was destined for the archives; indeed, much was written on surfaces that allowed one to write, erase, then write again.

In Inscription and Erasure, Roger Chartier seeks to demonstrate how the tension between these two concerns played out in the imaginative works of their times. Chartier examines how authors transformed the material realities of writing and publication into an aesthetic resource exploited for poetic, dramatic, or narrative ends. The process that gave form to writing in its various modes—public or private, ephemeral or permanent—thus became the very material of literary invention. Chartier's chapters follow a thread of reading and interpretation that takes us from the twelfth-century French poet Baudri of Bourgueil, sketching out his poems on wax tablets before they are committed to parchment, through Cervantes in the seventeenth century, who places a "book of memory," in which poems and letters are to be recopied, in the path of his fictional Don Quixote.