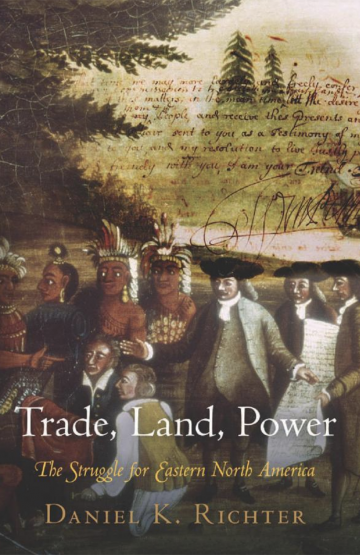 "Trade, Land, Power reveals an accretion of powerful concerns that gripped Native Americans and Europeans in early America: trade, power, land, and—gradually—race and racism. With a strong eye for both broad patterns and local contingencies, Richter grounds his provocative arguments in thorough research and presents them in energetic and crystalline prose."—Gregory Dowd, University of Michigan

In this sweeping collection of essays, one of America's leading colonial historians reinterprets the struggle between Native peoples and Europeans in terms of how each understood the material basis of power.

Throughout the seventeenth and eighteenth centuries in eastern North America, Natives and newcomers alike understood the close relationship between political power and control of trade and land, but they did so in very different ways. For Native Americans, trade was a collective act. The alliances that made a people powerful became visible through material exchanges that forged connections among kin groups, villages, and the spirit world. The land itself was often conceived as a participant in these transactions through the blessings it bestowed on those who gave in return. For colonizers, by contrast, power tended to grow from the individual accumulation of goods and landed property more than from collective exchange—from domination more than from alliance. For many decades, an uneasy balance between the two systems of power prevailed.

Tracing the messy process by which global empires and their colonial populations could finally abandon compromise and impose their definitions on the continent, Daniel K. Richter casts penetrating light on the nature of European colonization, the character of Native resistance, and the formative roles that each played in the origins of the United States.