Marc Flandreau on Capitalism: A Journal of History and Economics

In January 2020, UPenn Press launched a new journal, Capitalism: A Journal of History and Economics. Capitalism is made possible by the Howard S. Marks Chair of Economic History - History Department at Penn. The journal’s editorial collective and editorial board involves several scholars from the University of Pennsylvania. It bears witness to the strong presence of the Department of History at Penn in the study of the history of capitalism.

When Eric Halpern, the former director of UPenn press and a driving force in the launch of Capitalism asked me some time ago over lunch, with a wink, from which journals we would steal our papers, I answered, “From none that I can think of.” As bizarre as this may sound, the answer may define what kind of journal Capitalism is. Our project is not like other existing journals, which tend to be organized along disciplinary lines: History, economics, cultural studies, sociology, anthropology or legal and business history to name some of the journals that get to hold a part of the elephant of capitalism.

This is not to decry the insights they all return: By their very partiality, these disciplines deliver powerful hints.  They help our understanding of the elephant. Yet it is an altogether different attempt to try and launch a journal that puts recognition of the partiality of these insights at the center of its preoccupation. Perhaps an adequate description would be to think of Capitalism as an area studies journal: From this vantage point, there is no competitor of similar scope or ambition.

To take a real-life example, from the daily routine of scientific haggling in capitalism-related stuff circa 2020: The editor of an established economic history journal, for instance, may have a point when she complains about a lengthy digression on the meaning of liquidity in a particular 19th-century capital market - how traders thought of it, the language they used to discuss it and ultimately, the commensurability between this language and “modern” concepts and measures. What good, this editor argued, can there be in including such verbose ruminations? Tell us how you measure the thing and be done with it. This is not a journal for the history of economic ideas.

The editor’s attitude may be called the “Gordian knot” approach to the disciplinary divide. Pressed by the scarcity of space and by other imperatives, disciplinary editors have no patience for the entangled shapes of a convoluted knot. The approach has merit, to a point, and the point is the one when the elephant, instead of being “like a snake” in some sense, is construed as a snake. This is the point when the creativity of partiality becomes mere blindness, and gives way to absurdity. Economic ideas, it is a truism to recall, have much to do (in fact, everything to do) with economics and the processes of capitalism. They are an integral part of it. So while it is possible that the digression on liquidity does not belong to this paper and journal, the open question is, to what paper and journal does it belong?

The point, evidently, is not about bringing back the context or the voices suppressed or the experimental dimensions of history as elements of a conversation that will in fact never take place if disciplines remain what they are. If it is a sin, the blindness towards the elephant is not one of omission, but of commission. What is at stake in not seeing is a question on which anthropologists have meditated perhaps more than others (some of them at least). It consists in the duality of the concepts that structure our social orders. As Kenneth Pike emphasized for instance, concepts exist both from within and from without. In the above example of the early life of liquidity, the question to be addressed is that of the possible misalignment between liquidity for 19th century operators in, say, the London stock exchange, and liquidity as measured in a paper published in 2020 in the Journal of Finance. From this vantage point, the paragraphs which the editor wanted excised becomes the graft from which an entirely different article could grow. It is to this art of engraftment that Capitalism is committed.

From this are derived the most original traits of the project, which are the most important ones to emphasize as they affect how we read. In attempting to grow its own garden, Capitalism is not looking for fully fledged plants, especially if they are lifted from some else’s turf. Rather we pick up cut off grafts and try to grow them into novel perspectives (this journal being about capitalism, we speak of “originating”). In particular, we do not go by the usual “submission” process (what a word!) where the draft is sent to competent referees who deliver a verdict, thumb up, thumb down. In what we do, there is no “vetting” in any conventional sense, because vetting is an integral part of border control and academic property rights. As we have no interest or capacity to recognize disciplinary contribution, we would be very ill-placed to deliver this kind of verdict.

In discussing what we are after, the editorial collective is using the expression “post-disciplinary journal” (though we argue a bit about it, too). If it is to be successful, Capitalism must be a post-disciplinary journal. As argued in the foreword of the first issue, Capitalism as an area studies journal is not calling for a Treaty of Tordesillas among the various disciplines interested in the capitalism terra incognita.

We conceive of ourselves as responsible for bringing out ideas and insights that would not come to being if it were not for the existence of the journal. That is, we are not in the business of certification as embedded in processes of disciplinary accumulation. We don’t rate contributions, for this requires a metric and the metric requires a generally accepted methodology. Rather, we are scouts in the allegedly familiar land of capital (physical, symbolic, with its critics and defenders), which we propose to rediscover as if it were foreign.

We do not have firm answers, only firm questions. We do not purport to tell people what they should think, what is right and what is efficient, or what is fair, and why it all began. Many people do it already and as far as we can judge they do it adequately. Rather, we want to – relentlessly – question the border, the margin, the frontier: The limes where empires are defended, shaped and defined. If it is true that we live under the Empire of Capitalism and of its most tangible sign – the Marketplace – then chances are that our post-disciplinary adventure will achieve something valuable.

Value, after all, is all that one has to show in a capitalist world. 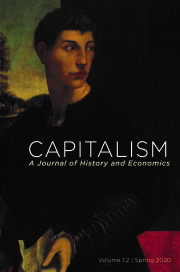 Executive Board and Advisory Board: